It’s been difficult, as of late, for Boston to maintain its distinction as one of the foremost liberal, progressive, tolerant, and accepting cities in the country.

Twice this year the city’s solemn Holocaust Memorial was shattered by projectiles hurled by locals, the first in June by a Roxbury man, the second on Monday by a Malden 17-year-old. Prior, since its dedication in 1995, it had stood unscathed.

Boston was called the most racist city by SNL cast member Michael Che. Baseball player Adam Jones was subjected to racial slurs in the outfield of Fenway Park.

On a fairly regular basis, it seems, incidents and encounters such as these teem to the surface, tearing the scar of racism before it’s ever been fully healed — if it ever can be. And almost every time Boston residents recall about its most infamous race-related moment: busing.

In order to create a unified front against these ongoing acts of racism, of which recent incidents also include a man being called the “n-word” while walking down the street and a woman being struck with an umbrella and berated with anti-Islamic slurs on the subway, the residents and government of Boston must rally behind the city’s seemingly forgotten heritage of standing up to such prejudices instead of defaulting to recollections of the busing  incident, which does not define Boston’s attitude toward minorities.

Boston was once the epicenter of resistance toward the institution of slavery. It was the home of abolitionist publication The Liberator by William Lloyd Garrison. It was where the notorious Fugitive Slave Law was met with heated opposition. (More on these to follow). It would inspire Henry David Thoreau’s celebrated speech Slavery in Massachusetts.

Said Thoreau, “I wish my countrymen to consider, that whatever the human law may be, neither an individual nor a nation can ever commit the least act of injustice against the obscurest individual without having to pay the penalty for it. A government which deliberately enacts injustice, and persists in it, will at length even become the laughing-stock of the world.”

Confronting and embracing these facts could help set Boston on the path to healing the wounds perpetually reopened by racism; it could revise the entire narrative. Gone could be the constant reminder of one if its darkest events. In doing so Bostonians will have something to celebrate, not wallow in something that agitates.

And as part of the deliverance of these facts, Boston can host events, lead tours, prompt discussions, incite learning, and instill in those who participate the ability to examine the multi-sided cause and effect of Boston’s history of racial tension, and how the impact of this examination on the rest of the country may inform the best manner of remembering and teaching history.

If Boston were to apply for Cultural District Designation with the Commonwealth, and identify an area encompassing applicable sites and locations, it could institute these kinds of public programming.

In the southern states it was no longer lawful to speak against slavery; any person found guilty of an agitation that might cause an insurrection of slaves would be hanged, in accordance with the statutes. Governor Lumpkin and the legislature of the state of Georgia offered $5,000.00 for the person of one Boston agitator to be brought to Georgia for trial.

In Boston an agitator who came to a meeting of the Female Antislavery Society had his clothes torn off, was dragged at a rope’s end through the streets, and, after being rescued by police, had to borrow coat, hat, and pantaloons to go to jail for further safety from those hunting him, who were respectable, well-to-do citizens of Boston.

These anti-abolitionists mobbed the Female Antislavery Society’s meeting with the intention of catching British firebrand abolitionist George Thompson. When the 5,000-person mob realized that Thompson was not present, they turned their sights on Sandburg’s “agitator.”

The “agitator” in question, on whom was a $5K bounty, was William Lloyd Garrison.

Indeed Boston, even in the early 1830s, had its fair share of haters and intolerants. Some considered abolitionists like Garrison to be fanatical notoriety seekers. Some were distressed at the prospect of disrupting the established economic order, in which the booming slave-fueled cotton industry in the South directly fed the looms and spindles in the North that transformed textiles into finished products.

Some of these people comprised the press corps of the day.

In October 1835 the Hampshire Gazette wrote,

From the tone of most of the Boston papers, we should suppose that much credit was due to the mob for their gentlemanly conduct and dignified demeanor, rather than that a flagrant outrage upon personal liberty had been committed…

In the land of the free, in one of its most refined cities, in sight of the building where liberty was first cradled, in open and broad day, citizens calling themselves ‘respectable’, to the number of five thousand, roused by the notice for a meeting of females, have assembled in riot, and hunted down…an innocent, terror−stricken man [Garrison], whose greatest offence is, that he has used that liberty which God had given him, and which the constitution has guaranteed to him, in wrestling in behalf of the oppressed…

Ringing in the new year in 1831, Garrison published his first edition of The Liberator in which he unapologetically expressed his, and like-minded abolitionists’, intention for their message of the destruction of slavery to be heard. “I will not equivocate − I will not excuse − I will not retreat a single inch − AND I WILL BE HEARD.”

He was heard. And because of it he suffered at the hands of backwards thinkers; his editorial participation in the abolitionist movement, though, would prove indispensable. Garrison would go on to publish The Liberator faithfully and continually from 1831 to 1865, ceasing publication after the ratification of the 13th Amendment forever abolishing slavery.

Boston memorialized Garrison by commissioning a statue of him — cast in bronze, depicting him seated with crumpled paper in hand and a voluminous tome beneath his chair — in 1886. He sits, as if pondering the phraseology and grammar of his latest editorial piece, on the Commonwealth Ave. Mall between Dartmouth and Exeter Streets.

On September 18, 1850, in the slaveholding capital city of Washington, President Millard Fillmore signed into law An Act to amend, and supplementary to, the Act entitled “An Act respecting Fugitives from Justice, and Persons escaping from the Service of their Masters,” approved February twelfth, one thousand seven hundred and ninety-three.

The legislation, known colloquially as the Fugitive Slave Law, intended as a compromise between the North and the South to prevent Civil War, stipulated that “the alleged fugitive was denied trial by jury; was forbidden to testify in his own behalf; could not summon witnesses, and was subject to the law though he might have escaped years before it was enacted.” 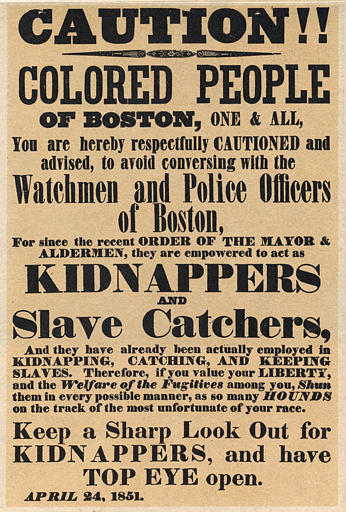 If someone attempted to hinder or prevent the law from being exercised, or if someone hid the alleged fugitive, that person was subject to a $1,000 fine or six-month prison sentence.

Four years later, a Virginia man named Anthony Burns was arrested in Boston by the
U.S. Marshal Service on the order of a warrant issued by circuit court commissioner Edward Loring.

Burns was born a slave and fled Richmond in 1853 with the help of a Boston sailor, settling in said city and taking employment in a clothing store. The allegation that he ran away was levied by his former owner, Charles Suttle, after Burns mailed a letter to his brother in Virginia via Canada (though it maintained a Boston postmark) and Burns was apprehended.

While Burns was sitting in jail awaiting trial, a group of abolitionists met at Faneuil Hall where they determined to spring Burns free. They smashed in the courthouse door with a battering ram, shattered windows with bricks, and tried to force their way in. Two men died in the riot, and the group was repelled.

The abolitionists then attempted to raise money to buy Burns from his owner, the offer to which they were refused.

Burns was ultimately found to be in violation of the Fugitive Slave Law and returned to a life of servitude.

He was marched to the wharves where he boarded a southbound ship.

Federal troops had been sent in by now-President Franklin Pierce of New Hampshire, to keep peacefully administer the law, with the assistance of artillery and field pieces.

Some 50,000 protesters lined the streets. They shouted “Shame! Shame! The hisses, groans, and other demonstrations.”

As the procession continued,

The rabble attempted to force their way upon the rear of the corps of United States Marines, but the formidable appearance of a detachment of National Lancers…deterred them at a short notice from the proceeding… the demonstrations were loud and uproarious…the procession was greeted the whole entire route with mingled groans, cheers, and hisses… the procession was greeted with a shower of cayenne pepper, cowitch, or some other noxious substance… a bottle, containing a liquid, thought to be vitriol was thrown from the Commonwealth building, nearly across State street.

The effort was noble but futile. Burns, however, would eventually be sold, freed, and returned to Boston, and enrolled in Oberlin College.

Bostonians, though, proved they could band together and exhibit their inherent revolutionary and organizational characteristics in an attempt to save a single man, whose life represented millions in bondage.

The Liberator and the events of the Slave Riot were centered in modern day Downtown Boston, and that section could easily be cordoned off for cultural investment. It could also extend down Tremont and Boylston Streets, along the edge of the Boston Public Gardens were statues current stand tall of Charles Sumner and Wendell Phillips, contemporaries of Garrison — whose statue slightly further down Commonwealth Ave. could also be included — and abolitionist leaders in their own right.

Such a district could prove crucial for Boston shedding itself of contemporary hate and bigotry. It would help instill in younger generations the notion that their forebears, though flawed, as all people are, acted on behalf of the deprived and enslaved because it was morally right and humane both in thought and action.

It would alert visitors and non natives that if Boston is guilty of intolerance of any kind, it’s of intolerance towards prejudice itself. And in that alert would be a ringing welcome for athletes, comedians, racial minorities, gender minorities, religious practitioners, and everyone in between.

One thought on “Boston, Promote Your Abolitionist Past for a More Tolerant Today”